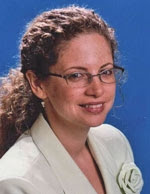 Delighted to announce that IntLawGrrl Karima Bennoune (left) is joining my former faculty, the University of California, Davis, School of Law (Martin Luther, Jr. King Hall).
Karima will become a Professor of Law at Cal-Davis following, in her words, "ten rewarding years" at Rutgers School of Law in Newark, New Jersey, where she's held the title of Professor of Law and Arthur L. Dickson Scholar. During that time she was honored with Rutgers' Chancellor's Distinguished Research Award and with the Derrick Bell Award given by the Association of American Law Schools Section on Minority Groups.
As readers of her IntLawGrrls posts well know, Karima is a noted expert in many fields of international law. She's now completing a book entitled Your Fatwa Does Not Apply Here, about people of Muslim heritage challenging fundamentalism. Her published scholarship includes "Terror/Torture," Berkeley Journal of International Law (2008), on which she posted here, and which Oxford University Press named among that year's Top Ten Global Justice Law Review Articles. Karima also wrote eyewitness accounts of events during the Arab Spring, for Britain's Guardian as well as for IntLawGrrls. Two of the United Nations' special rapporteurs – on protecting human rights while countering terrorism, and on violence against women – have cited her work.
Karima earned her juris doctor degree from the University of Michigan Law School, as well as a master's degree in Middle Eastern and North African Studies and a graduate certificate in Women’s Studies from Michigan. She went on to serve as a legal adviser for Amnesty International. Her human rights field missions have included Afghanistan, Egypt, Niger, Pakistan, Southern Thailand and Tunisia.  Karima serves on the board of the Network of Women Living Under Muslim Laws.
At Cal-Davis, Karima will contribute to the work of the California International Law Center founded by yours truly and now headed by our colleague Anupam Chander. And she'll be joining a faculty that includes a number of IntLawGrrls contributors: Afra Afsharipour, Andrea Bjorklund, and Lisa R. Pruitt.
Heartfelt congratulations!
by Diane Marie Amann at 2:00 PM

Congratulations to Cal-Davis on landing her! The students and faculty there are in for a real treat.