Hats off to Kate Doyle (below right), Senior Analyst of U.S. policy in Latin America at the highly regarded National Security Archives (NSA), for her receiving the Second ALBA/Puffin Award for Human Rights Activism.
This award, sponsored jointly by the Puffin Foundation and the Abraham Lincoln Brigade Archives, recognizes Kaye's tireless research and advocacy, over a twenty-plus-year career at NSA, to advance the search for truth and justice in countries like Mexico, El Salvador, Honduras and Peru and to press for the declassification of U.S. government documents that can help defeat impunity in those countries. She has testified as an expert in the cases against Peru's former President Alberto Fujimori, the Guatemalan genocide case and the Jesuits massacre case in Spain, and countless Inter-American Commission of Human Ri 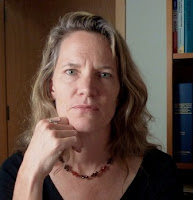 ghts cases.
Her co-recipient is Fredy Peccerelli, the Executive Director of the Guatemala Forensic Anthropology Foundation. Fredy is an innovative talent whose work as a forensic anthropologist has led to the exhumation of hundreds of mass grave sites from the Guatemalan civil war. He has trained dozens of others to work with him and has encouraged the growth of a generation of top flight professionals who are committed to the forensic investigation of the crimes of the Guatemalan military.
As detailed in this prior IntLawGrrls post, Kate and Fredy were featured in the documentary feature film, Granito: How to Nail a Dictator (2011), by IntLawGrrl Pamela Yates and Paco de Onís.
The ALBA/Puffin Award is part of a continuing effort to draw inspiration from the legacy of the International Brigades – 40,000 volunteers who helped fight fascism during the Spanish Civil War – and to connect that legacy to the activists of today. The Award Ceremony is open to the public, and no doubt Kate and Fredy would welcome the solidarity of the IntLawGrrls community in attending the event. It will be held at the beautiful Museum of the City of New York, 1220 Fifth Avenue at 103rd St., New York, NY 10029 on Sunday May 13th at 4:30 p.m. What a perfect way to celebrate Mother's Day!
by Carolyn Patty Blum at 7:00 AM