The International Law of Migration

Having participated in "An Emerging International Law of Migration" at the recent annual meeting of the American Society of International Law (prior posts available here), it's my pleasure to recap the discussion at this panel.
► Our colleague Peter Spiro set up two potentially conflicting, but also possibly complementary trajectories for international approaches to migration:
►►One is a management paradigm in which states maintain effective control to coordinate the flow of migrants.
►► The second paradigm is one in which actors focus on the role of human rights in governing state practices in the area of migration.

► Next, the presentation by Jacqueline Bhabha (right), the 2011-2012 Jeremiah Smith, Jr. Lecturer on Law at Harvard Law School, focused on the need for greater enforcement of human rights.
Jacqueline noted that while many states talk the human rights talk, fewer were walking the walk. She discussed the emerging international architecture of immigration and how it may lead to increased coherence and convergence around norms. While such fora provide an opportunity for states to discuss the importance of human rights, she was skeptical about the quick translation of human rights discourse into practice.
Jacqueline concluded with some suggestions for better integration of human rights into state practice. She called for more advocacy, more avenues for litigation, and a robust exchange about new standards. 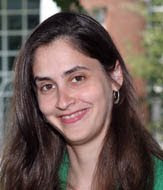 ► Yours truly, Lesley Wexler (right), Professor of Law and Thomas M. Mengler Faculty Scholar at the University of Illinois College of Law in Champaign, followed up with a discussion of regional and international consultative processes (RCPs).
These informal and limited membership organizations provide states with a non-binding opportunity to develop a language of migration; build consensus toward position convergence; and learn about best practices in policy making and implementation. Because these RCPs don’t require states to cede their sovereignty, they may present a more feasible alternative to more aggressive human rights treaties.
While their opacity may be a necessary precondition to their existence, Lesley noted the difficulty of assessing the practical achievements of RCPs. She spoke of the publicly available evidence which demonstrates that RCPs have facilitated information exchanges, encouraged research, and created databases of state policies. It also appears that RCPs are undertaking these activities with a desire to integrate human rights into their management approaches.
► Following

me was Sebastian Kohn, Program Officer at Open Society Justice Foundation, who spoke about the implementation of a child’s right to nationality as an example of a migration-related human right. He noted that contrary to some other areas of immigration.
The problem here seemed not to be a lack of an international treaty. Sebastian spoke of several principles governing nationality that treaties, such as the Convention on the Rights of the Child and the Convention to Protect the Rights of All Migrant Workers and their Families, enshrined and further expanded upon.
That said, he noted that states are often particularly reluctant to acknowledge limitations on rights to determine nationality. Like Jacqueline, Sebastian thought that more strategic litigation, expert consultation, and Human Rights Council resolutions might be a good way to strengthen existing norms and foster their implementation.
► The final speaker was David Martin.
The Warner-Booker Distinguished Professor of International Law at the University of Virginia School of Law, David served as deputy general counsel for the Department of Homeland Security from 2009-2011. He concluded the presentations with a more skeptical eye toward the integration of management and human rights approaches.
David suggested that early migration treaties balanced a state’s legitimate security and fraud concerns with the protection of an individual’s human rights. While those treaties may not have been sufficiently protective, David voiced worry that too many want to let human rights overwhelm other objectives of international migration law.
David discussed a number of cases that embodied his worry that courts were expanding the content of human rights and placing greater obligations on states. He concluded with the provocative observation that such an approach might be complicating anti-piracy efforts, and may encourage the shooting rather than capture of pirates, because of concerns they could not be returned to their home countries.
by Lesley Wexler at 7:00 AM