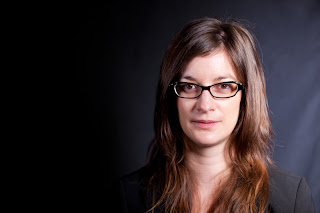 It's our great pleasure to welcome Alison Cole (right) as an IntLawGrrls contributor.
Based in New York and serving as Open Society Justice Initiative Legal Officer, International Justice, Alison is an expert on international criminal law. That's evident in her recent writings on the March 14 International Criminal Court judgment of conviction in Lubanga – published as an op-ed in London's Guardian and as an ASIL Insight, the latter co-authored with IntLawGrrl Kelly Askin. (IntLawGrrl Jennifer Easterday's prior post on this judgment is here.)
Alison's worked in prosecutions at the International Criminal Tribunal for Rwanda; as legal officer with the Co-Investigating Judges at the Extraordinary Chamber in the Courts of Cambodia; and with investigations at the International Criminal Court and at the Appeals Chamber of the International Criminal Tribunal for Rwanda and the former Yugoslavia. While working at these courts and tribunals, Alison covered cases addressing sexual and gender-based violence, including working on the Rape Database at the ICTR and assisting the expert witness on sexual violence, Binaifer Nowrojee.
Alison holds a first class B.A. honors degree in law from Cambridge University, participated in the European Erasmus exchange at Utrecht University, earned her LL.M. degree from Harvard Law School, and is a member of the New York bar.
In her introductory post below, Alison explains how a recent judgment of the International Criminal Tribunal for Rwanda bursts many myths about the viability of international prosecutions for rape and other sexual violence. Like the just-concluded 3-part series on post-genocide sexual violence survivors, Alison's post coincides with the 18th anniversary of the genocidal violence in Rwanda.
Alison dedicates her post to a fellow New Zealander, Kate Sheppard (1847-1934). Of Sheppard, about whom we've posted here and here, Alison writes:

'She was the woman behind the first critical step in women actualizing the right to vote. She was New Zealand’s pioneer suffragette – a tireless activist on a range of women’s rights issues, who ultimately achieved legislation which made New Zealand the first country in the world where women voted. In 1873 women rate-payers were able to vote in local

body elections, and after several attempts of lobbying the national government over 15 years, parliament finally passed the law giving women the vote in 1893. She then became active in the suffragette movement in other countries, including the UK and the USA. She also adopted a range of other causes including dress reform for women, such as the abolishment of corsets, and promoted bicycling and other forms of physical activity for women. Recognized as a national treasure and a great source of pride for New Zealanders, her image appears on the New Zealand $10 banknote.'

Sheppard joins the many other inspiring women honored on IntLawGrrls' foremothers page.
Heartfelt welcome!
by Diane Marie Amann at 6:30 AM