It is our great pleasure today to welcome Dr. Anne-Marie de Brouwer and Sandra Ka Hon Chu as IntLawGrrls contributors.

► Anne-Marie (right) is Associate Professor in International Criminal Law at the Department of Criminal Law of Tilburg University in the Netherlands, from which she also received LL.M and Ph.D. degrees. Additionally, she's a Research Fellow with the International Victimology Institute Tilburg, also known as INTERVICT. Previously, Anne-Marie was an associate legal officer at the Women’s Initiatives for Gender Justice in The Hague.
Her main areas of research and interest include international crimes, international criminal law and procedure, victims’ rights, victimology, sexual violence and transitional justice.
Among the many books she's written or co-edited is Supranational Criminal Prosecution of Sexual Violence: The ICC and the Practice of the ICTY and the ICTR (2005), for which she received the Max van der Stoel Human Rights Award 2006.
Anne-Marie is the Chair of the Mukomeze Foundation, which aims to improve the lives of women and girls who survived sexual violence during the Rwandan genocide.
She studied international law at Sapienza-Università di Roma in Italy, and earned an LL.M. in international human rights law from the University of Essex in England. 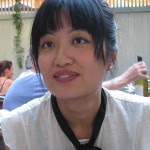 ► Sandra (right) has served since 2007 as a senior policy analyst at the Toronto-based Canadian HIV/AIDS Legal Network, where she works on HIV and human rights issues concerning prisons, sex work, women and newcomer communities.
Previously she, like Anne-Marie, worked in The Hague for the Women's Initiatives for Gender Justice. Her international experience has also included assignments in Tripoli, Libya, for Adam Smith International, in East Timor for UNICEF, in Hong Kong for the Asian Migrant Centre, and in Vancouver for the Asian Society for the Intervention of AIDS.
Sandra holds a B.A. in Sociology from the University of British Columbia, an LL.B. from the University of Toronto, and an LL.M. from the Osgoode Hall Law School of York University. She was called to the bar of British Columbia in 2003.
Anne-Marie and Sandra also are co-editors of The Men Who Killed Me: Rwandan Survivors of Sexual Violence (2009). Published in Dutch as De mannen die mij hebben vermoord (2011), the book, for which playwright/activist Eve Ensler wrote an afterword, features seventeen testimonials of survivors of sexual violence.
In their introductory post below, they begin a 3-part series on this 18th anniversary of the outbreak of violence now known as the Rwanda genocide. Specifically, they describe recent re-interviews of survivors 1st profiled in The Men Who Killed Me, analyze the legacy of Rwanda's post-genocide gacaca courts in light of those interviews, and set out a framework for future aid to sexual violence survivors. Part 2 of the series is here; Part 3 is here.
Heartfelt welcome!
by Diane Marie Amann at 7:00 AM