It's our great pleasure today to welcome Elizabeth Trujillo (right) as an IntLawGrrls contributor.
Elizabeth is a Professor of Law at Suffolk University Law School in Boston, Massachusetts, where she teaches Contracts, International Sales, and NAFTA and International Trade Regulation. Currently, she is a Visiting Scholar at the Institute of Global Law and Policy at Harvard Law School, where she's writing on issues of transnational governance regarding sustainable development and economic development. Elizabeth's publications have examined the relationship between international trade and domestic regulatory structures, specifically in the areas of energy, antitrust law, and international consumer protection law.
In her introductory post below, Elizabeth discusses a World Trade Organization decision, now under Appellate Body review, which underscores the dilemma of balancing economic development and sustainable development.
Her professional affiliations include service as Co-Vice Chair of the American Society for International Law International Economic Law Interest Group and as a member of the Program Committee for just-concluded ASIL's 2012 annual meeting.
Previously Elizabeth, who earned her bachelor's and law degrees at the University of Houston, was an Assistant Professor at the University of Detroit Mercy School of Law. She spearheaded a J.D., LLB, L.E.D. trilateral degree program among that school, Mexico's Instituto Tecnologico y de Estudios Superiores de Monterrey, and Canada's University of Windsor Faculty of Law. She's also been a Visiting Professor at Florida State University College of Law and an associate at the New York law firm Dewey and LeBoeuf. She clerked at the U.S. District Court Southern District of Texas, UNESCO in Paris, France and the Cámara Nacional de Apelaciones en lo Comercial in Buenos Aires, Argentina.
Elizabeth dedicates her post to Serafina Dávalos (below left). (photo credit) Of Dávalos, who was born in 1883, Elizabeth writes:

'The first female lawyer and feminist activist in Paraguay and one of the first in Latin America, Serafina completed her Masters Degree in Education in 1898 and taught at the Colegio Nacional de la Capital. In 1904, she founded a university for women 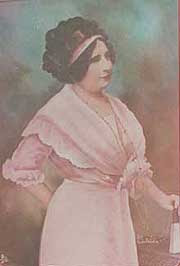 specializing in commerce and accounting. She received her law and social science degree in 1907 from the National University in Asunción. The same year she also wrote her controversial thesis, Humanismo, which called for the emancipation of women and critiqued traditional attitudes of the inferiority of women to men. In 1910, she represented Paraguay in the First International Feminist Congress held in Argentina. Serafina was active in developing the feminist movement in Paraguay, participated in changing laws that discriminated against women, and fought for women’s suffrage. Serafina also became the first female justice on the Supreme Court of Paraguay. She died in 1957, four years before Paraguay granted women the right to vote. Currently, Paraguay grants an award in her name, to promote and recognize those who work to improve the lives of Paraguayan women. In remembering Serafina, may she remind Latina women everywhere of their immense capacity to contribute to change in the world.'

Dávalos joins the many other inspiring women honored on IntLawGrrls' foremothers page.
Heartfelt welcome!
by Diane Marie Amann at 6:10 AM