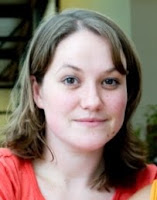 It's my great pleasure to introduce a former student of mine, Lindsay M. Harris (left), as an IntLawGrrls contributor.
Lindsay is an Akin Gump Equal Justice Works Fellow and Immigration Staff Attorney at the Baltimore, Maryland, and Washington, D.C., offices of the Tahirih Justice Center. Lindsay leads the Tahirih Justice Center's African Women’s Empowerment Project. She also teaches Refugee and Asylum Law as an Adjunct Professor at George Mason University School of Law in Arlington, Virginia.
Her introductory post below draws from both these experiences: reflecting on a quiz she gave to law students, she discusses the efforts of the African Women's Empowerment Project to litigate gender-based asylum claims on behalf of African immigrant girls and women. Lindsay concludes by suggesting a legislative change that might ease difficulties that the current state of the law poses to such claims.
A 2009 graduate of the University of California, Berkeley, School of Law, Lindsay was an excellent student in the Civ Pro II class I taught while a visiting Professor of Law there. Her exemplary law school record includes: receipt in 2009 of the Sax Prize for Excellence in Clinical Advocacy, for her participation in Berkeley Law’s International Human Rights Clinic and the East Bay Community Law Center’s Health and Immigration Unit; work with Lawyers for Human Rights and the Forced Migration Studies Program in South Africa, and with the Center for Gender and Refugee Studies at the University of California Hastings College of the Law; leadership of the California Asylum Representation Clinic and the Boalt Hall Committee for Human Rights; and service as Symposium Editor and Senior Articles Editor for the Berkeley Journal of International Law. In 2009, Lindsay published an article on gender-based asylum claims in South Africa; in 2010, a co-authored article on gang-related asylum claims in the United States.
After graduation, Lindsay was a law clerk for Judge Harry Pregerson, U.S. Court of Appeals for the Ninth Circuit, where she focused on immigration and asylum law. Prior to law school, she'd been as Managing Director of a fair trade non-profit organization, working with artisans in seven African countries. 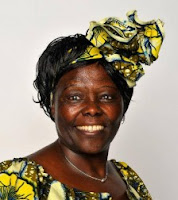 Lindsay dedicates her posts to Dr. Wangari Muta Maathai (right), the 2004 Nobel Peace laureate who passed away last September, 71 years after her birth in a village in Kenya. (photo credit) Lindsay writes:

'She was a true visionary and activist who understood the important connections between so many of the world’s problems today, including human rights, the environment, and governance.'

Today Maathai (prior posts) joins the many other women honored on IntLawGrrls' transnational foremothers page.

Heartfelt welcome!
by Diane Marie Amann at 6:32 AM