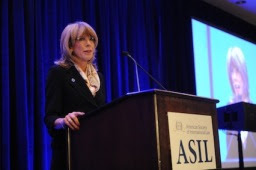 It's our great honor today to welcome Patricia O'Brien (left) as an IntLawGrrls contributor.
Patricia is the Under-Secretary-General for Legal Affairs and United Nations Legal Counsel. U.N. Secretary-General Ban Ki-moon appointed her to this position as the top U.N. lawyer in 2008. As head of the Office of Legal Affairs, based at U.N. headquarters in New York, Patricia leaders about 200 staffers of more than 60 different nationalities as they endeavor to provide a unified central legal service for the United Nations. She's the 1st woman to hold the post.
At the time of her appointment, Patricia had been serving since 2003 as the Legal Adviser to the Department of Foreign Affairs of Ireland – a position that found her advising on legal matters related to Irish foreign policy. Before that she had served as a Senior Legal Adviser to Ireland's Attorney General and as Legal Counsellor at the Irish Permanent Representation to the European Union, in Brussels. Matters on which she advised government of Ireland included proceedings before the International Court of Justice, the European Court of Human Rights, and the European Court of Justice; moreover, she took part in expert legal meetings in the United Nations, the Council of Europe, and the European Union.
Patricia earned both Bachelor of Arts (Mod) in legal science and Master of Arts degrees from Trinity College, Dublin; a Barrister-at-Law (BL) from Kings Inns, Dublin; and a Bachelor of Laws from the University of Ottawa, Canada. She practiced law at the Irish Bar from 1979 to 1988, followed by a year of practice at the Bar of British Columbia, Canada. From 1989 to 1992 she held academic positions at the University of British Columbia. She is also a member of the Bar of England and Wales and a Fellow of the Society for Advanced Legal Studies, Institute of Advanced Legal Studies, London.
Since her appointment, Patricia has spoken widely, in New York, London, Geneva, St. Petersburg, Istanbul, Kampala, and elsewhere, on matters relating to the United Nations. Her speeches are available here; an account of her recent activities is here.
In her post below, Patricia contributes the remarks she delivered at the opening plenary session, on "Military Intervention and the Law of Peace," at last week's annual meeting of the American Society of International Law. (credit for photo courtesy of ASIL)
Heartfelt welcome!
by Diane Marie Amann at 6:00 AM