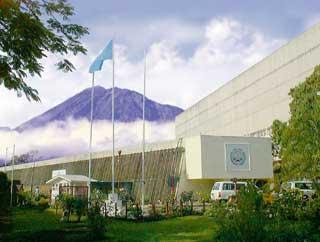 The phrase “rape and pillage” is common parlance in our society: JayZ raps about it, Sarah Silverman jokes about it. The tragic fact is that rape is a weapon of war. But after working at the different international criminal courts and tribunals, I found a series of myths blocking the translation of this “common knowledge” into convictions.
The judgment and sentence in Prosecutor v. Karemera et al., issued recently by Trial Chamber III of the International Criminal Tribunal for Rwanda (right), is a milestone for international justice. (photo credit) It demonstrates that we can establish case law which acts on our common knowledge and strengthens the protection of women.
The two accused in the case were the Minister of the Interior and the president of the governing political party. Although they oversaw horrific atrocities committed during the 1994 genocide, neither was personally charged with committing rape. The prosecutors on the Karemera case overcame systemic prejudices against prosecuting rape and secured the first international judgment to ever hold high-level government officials responsible for rape in such circumstances.
But there is still a lot to be done.
► The first challenge is lack of awareness. Rape is a difficult subject that people commonly avoid talking about. But given the prevalence of rape during armed conflict, international investigators cannot claim to be unaware and shy away from the topic. As one of the accused said during the Karemera trial:

'[I]t would be ridiculous to believe that soldiers would not commit rape during war.'

Yet so far, international investigations have failed to adequately recognize this.
Most tribunals established after World War II did not even include rape in their statutes. The tribunals addressing the wars in the former Yugoslavia, Sierra Leone, Cambodia, and the world’s first permanent tribunal, the International Criminal Court, all failed to include rape charges in their first cases. The Rwandan tribunal only included sexual violence in the first genocide case after a witness spontaneously told the judges about the rape of her six-year-old daughter.
A clear lesson learnt can be learnt: be aware of rape and plan investigations accordingly.
► The second challenge is the mistakenly narrow view of the evidence.
Rape is often thought of as “more difficult to prove” than other international crimes. There is a myth that “rape victims don’t talk”. During the early days of legal proceedings at the Rwanda Tribunal, staff told women’s rights advocates that the witnesses did not want to provide rape testimony. Researchers at Human Rights Watch proved this wrong when they conducted hundreds of interviews in a sensitive manner where rape survivors felt comfortable to talk. Lesson learnt: look for the evidence in the right way before you decide it’s not there.
It’s true that rape evidence does not always conform to the typical conceptions of criminal evidence.
There is no smoking gun.
There is no paper trail.
But this is the same for most international crimes, particularly in the environment of today’s asymmetrical conflicts. It is therefore necessary to be open to a broader range of potential evidence. For example, establishing that there was a permissive environment for rape is also potentially corrobative evidence at international tribunals; it can be shown by asking all witnesses on the stand what they knew of rape being committed or by obtaining descriptions of female corpses with indications of rape.
Lesson learnt: Broaden your means of proof and collect a range of evidence, including “non-traditional” evidentiary material.
► It is also often the case that the rapist is not the accused, but instead, the person higher up the command chain. To some, that seems to be grossly counterintuitive: that persons can be held responsible for rapes they did not personally commit. However, this is true for most international crimes, as international tribunals limit personal jurisdiction to those “most responsible”. Such senior leaders include the masterminds orchestrating the crimes far from the killing fields and far from the rape victim. In such cases, the accused may also be held responsible for murders or tortures that they did not personally commit.
Lesson learnt: Don’t hold rape to a higher standard of proof than required for other crimes.
► Finally, there is the myth that the legal components of the international crime of rape are the same as the crime of rape under national law.
Again, it can be difficult to accept that there are varying approaches to the core crimes which regulate our society; however, international law can reflect global standards which may be different from how it is in our country.
There are several ways that the international crime of rape may be different from some national definitions of rape. For example, I’ve worked with fellow international criminal investigators who were adamant (based on their national experience) that men could not be raped, whereas male rape, including by female perpetrators, has been included under international criminal law. There are also important legal and procedural protections offered to rape victims by most international courts which are typically absent from national courtrooms, such as permitting in camera testimony and not permitting attacks on the victim’s credibility through probing their sexual relationships. Furthermore, international criminal law does not revolve around the issue of consent to the same extent as it does in many national settings. This is because rape as an international crime must first be proved to cross the threshold of taking place during conflict, which renders consent nonsensical, in the same way that it is not necessary to prove lack of consent to torture or murder.
Lesson learnt: recognize that international law can be different, and offer more protections, than the national law we may be used to.
The Karemera judgment shows that lessons can be learnt and myths can be busted, even if that means challenging prejudices which may be so entrenched, we don’t even realize they are there. We must develop international justice in a manner which will lead to judgments such as Karemera, which articulate law that reflect the realities of human suffering by holding senior leaders responsible for rape – the same senior leaders that use rape as a tool of conflict. Deterrence theory mandates that we incorporate the prohibition of rape into our collective consciousness as the necessary corollary to our familiarity with the term “rape and pillage”. It’s more than just a lyric in a rap song, and it’s definitely not a joke.
by Alison Cole at 5:00 AM

Thanks for the fantastic post! I really appreciate the way the issues were laid out and the lessons learnt were made obvious. And thanks for bringing attention to this very serious issue.