'They offer to give the young people a vehicle, a weapon. Someone who was on a donkey's back finds himself with a 4x4. That's how they hoodwink people.'

– Nina Wallet Intalou (left), speaking to Le Monde reporter Isabelle Mandraud. (The translation from French is mine.) Wallet Intalou was interviewed Monday at her home in Nouakchott, the Mauritanian capital where she and other top leaders of the Mouvement national de libération de l'Azawad – the Tuareg independence group that earlier this month declared a northern portion of Mali to be the country of Azawad – live in exile. Wallet Intalou is the only woman on the Mouvement's executive committee – a post she gained only with persistence, as she described in the interview. (credit for Le Monde photo by Laurent Prieur)
Azawad is recognized by no state. (credit for map below, showing disputed area in white) Indeed, it's been denounced not only by Mali but also by Algeria, which it borders and which also has a Tuareg population (see Voice of America map here), and by ECOWAS, the Economic Community of West African States of which Mali is a member. 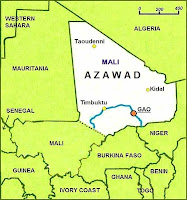 Negotiations over the dispute are reported to have begun this week.
As for the quote above, who are the "they" whom Wallet Intalou said are luring youths into combat?
Forces said to be affiliated with Al-Qaida au Maghreb islamique, which, according to Le Monde, has "profited" from the turmoil of the months-long independence rebellion (prior post) by laying claim to Timbuktu and other cities in the newly proclaimed Azawad.
by Diane Marie Amann at 5:00 AM