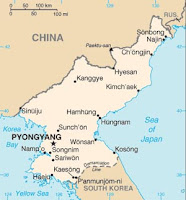 'The situation in North Korea is a clarion call for the Security Council and other U.N. members to show courage in a case of political complexity. There can be few places in the world where the human rights situation is more egregious and yet more overlooked than North Korea.'

-- A joint op-ed in the International Herald Tribune by Geoffrey Nice, who served as chief prosecutor in the trial of Slobodan Milošević at the International Criminal Tribunal for the former Yugoslavia, and Professor William A. Schabas, Middlesex University, London. They lead by recount the story of a victim of the regime, Shin Dong-hyuk, as told in a brand-new book, Escape from Camp 14.  Nice and Schabas place this story in the context of he pattern of human rights abuses in the country formally known as the Democratic People's Republic of Korea. (map credit) Then, to quote the op-ed's title, they urge the international community to Put North Korea on Trial. As Nice and Schabas note, it's a goal realizable only by the Security Council, given that North Korea does not belong to the Rome Statute of the International Criminal Court.
by Diane Marie Amann at 2:00 PM