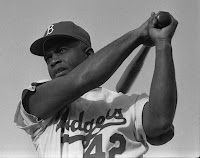 ... 1947 (65 years ago today), the United States' major league baseball industry 1st admitted an African-American player to its ranks. He was, of course, Jack Roosevelt Robinson (right), who'd been born 28 years earlier in Cairo, Georgia. He'd competed at the varsity level in 4 sports (baseball, basketball, football, and track) while a student at UCLA, served in the Army, and played in the Negro Baseball League. The day after this one, he would don a Brooklyn Dodgers uniform; by season's end his stellar performance would earn him the title of Rookie of the Year. (credit for 1955 photo)