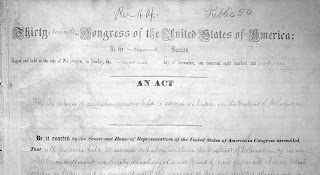 On this day in ...
... 1862 (150 years ago today), slavery was ended in the District of Columbia when President Abraham Lincoln signed into law the Compensated Emancipation Act. The law's provision included

'immediate emancipation, compensation to former owners who were loyal to the Union of up to $300 for each freed slave, voluntary colonization of former slaves to locations outside the United States, and payments of up to $100 for each person choosing emigration.'