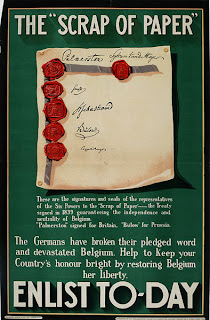 On this day in ...
... 1839, was signed the "Treaty between Great Britain, Austria, France, Prussia, and Russia, on the one part, and The Netherlands, on the other." Known as the Treaty of London in recognition of the British capital in which it was signed, by this pact the signatories agreed that "Belgium ... shall form an Independent and perpetually Neutral State," which "shall be bound to observe such Neutrality towards all other States." In 1914, Germany insisted that Britain deem the treaty a mere "scrap of paper"; Britain's refusal and Germany's subsequent invasion of Belgium prompted Britain to lead its empire into World War I. (credit for enlistment poster now at the Canadian War Museum)
(Prior April 19 posts are here, here, here, here, and here.)
by Diane Marie Amann at 3:00 AM