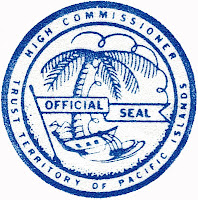 On this day in ...
...1947 (65 years ago today), U.N. Security Council Resolution 21, titled "Trusteeship of strategic areas," changed the status of islands in the Pacific that once had been controlled by Germany but then, following Germany's defeat in World War I, were assigned to Japan via League of Nations mandate. Japan having lost World War II, the islands were, by this resolution, made a Trust Territory of the United States. It did so on authorization of Chapter XII of the U.N. Charter, which set forth a framework for trusteeship. The Trust Territory of the Pacific Islands continued until 1986, after which re-formations occurred. (image credit) These islands include the Republic of the Marshall Islands, the Federated States of Micronesia, the Commonwealth of the Northern Mariana Islands, and the Republic of Palau.
(Prior April 2 posts are here, here, here, here, and here.)
by Diane Marie Amann at 3:00 AM