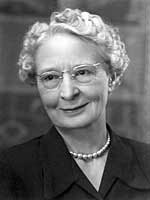 ... 1887, Dr. Margaret Newton (right) was born in Montreal, Canada. Initially educated in a rural area, eventually she and her family moved to the city for a time, where she continued her studies, eventually beginning to teach at the same one-room schoolhouse where she'd 1st studied. Not content with a Normal School teaching degree, she fought successfully for admittance to Macdonald College, where she was a superb student and from which she became the 1st woman to obtain an agriculture degree, in 1918. Just 4 years later she would become the 1st Canadian woman to earn a Ph.D. in Plant Pathology, from the University of Minnesota. She embarked on a career as a university professor, and on account of her research into ways to avoid disease in grain crops integral to her country's economy, she "became an internationally acclaimed scientist and a striking role model for Canadian women in science." Newton died in Victoria, British Columbia, in 1971.