On this day in ...
... 1952 (60 years ago today), United Press International's Hugh Baillie, seated far right at the picnic table below, onsite in Nevada, reported: 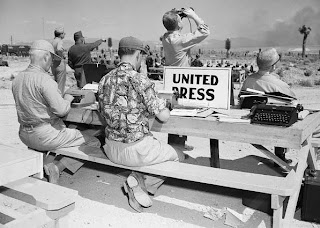 'Hell burst from the skies over Yucca Flat this morning as America's latest model atom bomb exploded with enough force to devastate much of New York, Chicago, Los Angeles or any other big city.
'The spectacular detonation, televised to a nationwide audience for the first time in history, was believed to have been at least as powerful as any exploded on the Nevada test site since it was activated 18 months ago.'

The explosion was sighted as many as 430 miles away. At the other extreme, Baillie reported that some "GI's and generals" watched from foxholes within 4 miles of the test site -- a fact that stuns any reader today who's aware of the effects of radiation exposure. (photo credit)