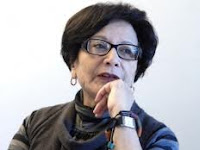 On this day in ...
... 2007 (5 years ago today), Souhayr Belhassen of Tunisia was elected president of FIDH, the Paris-based nongovernmental organization the full name of which is Fédération internationale des droits de l'homme. (Prior posts.) A journalist since the late 1970s as well as a human rights activist, Belhassen (left) was born in Tunisia in 1943 and educated at the University of Tunis and at Sciences Po in Paris. Her FIDH tenure has been marked by her promotion of women's human rights; just this past March, she was the 1st-named signatory of "L'appel des femmes arabes pour la dignité et l'égalité" ("The Call of Arab Women for Dignity and Egality"), published in the Paris daily Le Monde.