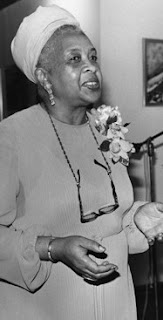 On this day in ...
... 1919, Dr. Marie Davis Gadsden (left) was born in a town in south central Georgia, the daughter of a physician and a teacher. She grew up in coastal Savannah, the city to which her family moved after, she said, a lynch mob had threatened her father. After earning bachelor's and master's degrees from universities in Georgia, she took up studies at the University of Wisconsin, earning her Ph.D. in English in 1954. Then she studied at Oxford, as a Fulbright Scholar, and did postdoctoral work in Ireland. Gadsden worked as a university professor of English, and also trained teachers for the Peace Corps. Her work took her frequently to Africa and the Caribbean, where she worked on a variety of development and education projects for numerous foundations. She became the 1st black woman to lead Oxfam America, serving as its board chair. Gadsen died at age 92 just last month, on March 14. (credit for 1981 Fred Sweets/Washington Post photo)