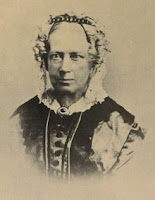 ... 1807 (205 years ago today), Mary Carpenter (right) was born into the family of a Unitarian minister in Exeter, in Great Britain. (photo credit) Educated at her father's school, she became a governesss at age 20; then, 2 years later, she and her mother opened a small girls school. By the mid-1830s she was active in working on behalf of the poor, founding a "ragged school" for poor children in Bristol. This led to interest in the fate of young persons caught up in the criminal justice system and, in 1852, establishment of a reform school. She published widely and campaigned for women's suffrage and for educational reform statutes. A frequent visitor to India, she pushed for reform there as well. Carpenter died in Bristol in 1877.