On this day in ...
... 1887 (125 years ago today), a visually impaired woman who'd just begun service as an in-home governess, and who would herself turn 21 later in the month, Anne Sullivan, wrote that "something important has happened" in a letter to Sophia Hopkins, her patron at the school where she'd been trained. Sullivan elaborated that she and her pupil, who could neither see nor hear, had gone to a water pump, where Sullivan made the girl 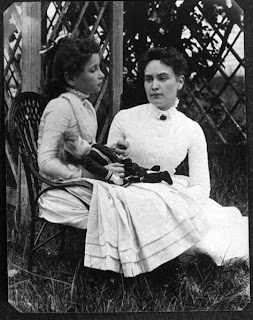 'hold her mug under the spout while I pumped. As the cold water gushed forth, filling the mug, I spelled "w-a-t-e-r" in Helen's free hand. The word coming so close upon the sensation of cold water rushing over her hand seemed to startle her. She dropped the mug and stood as one transfixed. A new light came into her face. She spelled "water" several times.'

As a result of this breakthrough, Sullivan (prior posts) concluded that her pupil -- Helen Keller (prior posts), an IntLawGrrls foremother then only 6 years old -- "has learned that everything has a name, and that the manual alphabet is the key to everything she wants to know." (credit for 1888 photo Keller, left, and Sullivan)