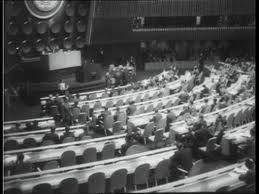 ... 1953, voted 57 to 1, the General Assembly elected Dag Hammarskjöld to become U.N. Secretary-General, upon prior recommendation of the Security Council. (photo credit) A diplomat and son of a onetime Prime Minister of Sweden, Hammarskjöld would become known for innovative development of the United Nations Organization; among other things, he "led missions to China, the Middle East, and elsewhere to become better acquainted with the United Nations' member states and to arrange peace settlements." As we've posted, he died while on U.N. duty, in a 1961 plane crash in Northern Rhodesia. Last year's 50th anniversary of that event prompted many remembrances, including this conference. And just a week or so ago, at the annual meeting of the American Society of International Law, Melbourne Law Professor Anne Orford delivered an excellent talk that considered contemporary global security challenges in light of Hammarskjöld's legacy (video available here).