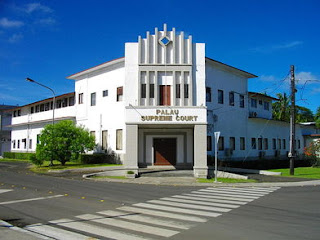 KOROR, Palau – When I graduated from law school four years ago, I had no idea that I would one day write appellate opinions on matters ranging from land disputes to procedures for determining clan leadership for the highest court of a tiny island nation in the Pacific Ocean.
I had no idea that I would wear sandals to work, or spend Saturdays running at 5 a.m. with some of my bosses, the Supreme Court Justices.
But this is my reality as Court Counsel for the Supreme Court of the Republic of Palau. (photo credit)
I arrived here in October for a one-year term, and I absolutely love it. As one of three Court Counsel, my job is to write the opinions of the Appellate Division. I have other duties concerning court administration, and in fact one of the aspects I like best about this job is wearing many hats and working on a variety of projects! 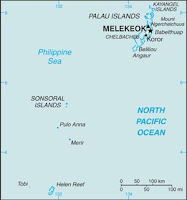 Palau is a tiny country, with a population of about 20,000 and a national per capita income of about $10,000. While Palau approved a new constitution in 1981, it was not until 1994 that Palau was no longer a UN-administered trusteeship. Palau’s main island, Babeldaob, is the second-largest in Micronesia, and in total Palau contains 190 square miles of land. (map credit)
The country is rather isolated geographically, located two hours (by plane) west of Guam and about two hours east of the Philippines. The natural beauty, both above and below the water, is stunning. (credit for photo below of view from Bloody Nose Ridge, at the island of Peleliu, part of Palau)
The culture here reflects the influences of the colonizing powers: first the Germans, then the Japanese, and then the Americans. I would say Palau mostly reminds me of America, but with a few exceptions: we take our shoes off when entering most buildings, we use chopsticks, and the Palauan language uses many Japanese words.
Nonetheless, Palauans have retained their matrilineal culture, continue to celebrate age-old customs and ceremonies, and many people enjoy the beautiful wooden “storyboard” carvings that depict important legends (check out the Palau Supreme Court homepage to see a picture of the legend of Dirrengas, a strong woman who happened to be Palau’s first judge/mediator). 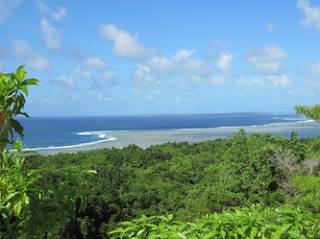 The Judiciary here is modeled on the U.S. system, so we apply Palau’s statutes and cases and then look to U.S. case law as persuasive authority. Because the Supreme Court has both a Trial Division and an Appellate Division, we do some trial work in addition to writing appellate opinions for the panel of three Supreme Court Justices. I also work as the Land Court clerk, writing opinions for the special court designed to mediate the many disputes that arise from years of administration by German, Japanese, and American governments. Finally, I write content for the court’s newly designed website, and I handle recruiting.
Working for the Supreme Court of another country is fascinating. We have a varied appeals docket, and I am always learning something new. While there are many Palauan attorneys here, there are a number of American attorneys working in government (public defenders, attorneys general, or for other agencies), in private practice, or for legal services.
What is more, it is exciting to be here at a time when Palau is having so many “firsts”:

► We may have our first jury trial this summer, and we will start e-filing soon as well.
► We will also have a presidential election in November, and the campaigning makes life here more even more fun.
Outside of work, there is a small but tight-knit community of expats from the United States, the Philippines, Australia, Bangladesh, and other part of Europe. Sports are really big, so that’s why I have sometimes found myself running through the jungle at 5 a.m. with my bosses! I have learned to SCUBA dive, I’ve been involved in volunteer activities such as coaching a high school moot court team, and I’m also keeping a blog. I will continue to send updates about my time here and I welcome any thoughts of comments you have, either here or on my blog, Pen Palau.
by Megan Knize at 11:12 AM