Four years ago, when I embarked on the research project that led to my book Climate Change, Forced Migration, and International Law, just published by Oxford University Press, there was a rather scant literature on the impacts of climate change on human movement. Much of what did exist, particularly in the field of international law, was based on academic analysis of existing international law frameworks, especially refugee law, and assumptions about the nature and scale of displacement – largely because of the absence at that time of comprehensive empirical studies.
My objective was to map the degree to which existing international legal frameworks could already cater for the protection needs of people displaced by the impacts of climate change, and, perhaps more crucially, to identify the extent to which ‘climate change’ could be isolated as the cause of predicted widespread movement – and whether that mattered in terms of finding legal solutions. 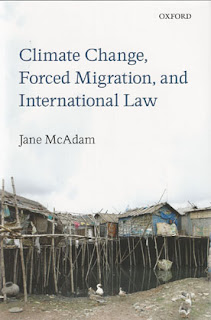 This book critically examines whether states have obligations to protect people displaced by climate change under international refugee law, international human rights law, and the international law on statelessness. It evaluates:
► Whether the phenomenon of ‘climate change-induced displacement’ is an empirically sound category for academic inquiry by examining the reasons why people move (or choose not to move or are unable to move);
► The extent to which climate change, as opposed to underlying socio-economic factors, provides a trigger for such movement; and
► Whether traditional international responses, such as the conclusion of new treaties and the creation of new institutions, are appropriate solutions in this context.
In this way, the book queries whether flight from habitat destruction should be viewed as another facet of traditional international protection or as a new challenge requiring more creative legal and policy responses.
What makes it distinctive from an international law perspective is that it is grounded in fieldwork in some of the states most affected by the impacts of climate change: the small island states of Kiribati and Tuvalu in the western Pacific, and Bangladesh and India. Drawing on empirical evidence collected through interviews and observations on the ground, it reconceptualizes the phenomenon of ‘climate change-related displacement’ to emphasize the needs and desires of affected communities, the importance of community participation, and the necessity of multi-pronged approaches rather than a one-size-fits-all response, so that legal and policy developments are attuned to the groups they are intended to serve.
If such contributions are not fed into the debate, we may end up with solutions that work neatly in theory, but which do not respond to the likely patterns of movement on the ground. Crucially, law and policy in this area must be developed within a human rights framework, underscored by broader humanitarian norms such as the fundamental principles of humanity, human dignity, human rights and international cooperation.
by Jane McAdam at 6:00 AM