The United Nations & the responsibility to protect

(My thanks to IntLawGrrls for the opportunity to contribute this post, consisting of remarks I delivered last Thursday at "Military Intervention and the Law of Peace," the opening plenary session of the 2012 annual meeting of the American Society of International Law)

Introduction
Ladies and Gentlemen, it is a great pleasure to be here with you. Today’s panel raises very topical issues. As we are limited by time, I will focus my comments on the concept of the “Responsibility to Protect” (R2P) in the context of current work at the United Nations, and its implementation in the situations in Libya and Syria.

2005 World Summit
In 2005, more than 150 Heads of State and Government unanimously embraced the “Responsibility to Protect” (R2P). They declared that

'each individual State has the responsibility to protect its populations from genocide, war crimes, ethnic cleansing and crimes against humanity,'

'the international community, through the United Nations, also has the responsibility … to help protect populations'

The three pillars of R2P 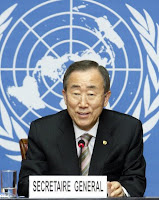 In addressing the challenge of “operationalizing” R2P, the Secretary-General has identified three pillars of action:
► Pillar I is the enduring responsibility of States to protect their populations.
► Pillar II is the role of the international community to assist States to protect their populations before crises and conflicts escalate to the level of the commission of R2P crimes.
► And Pillar III involves a commitment that States

'are prepared to take collective action in a timely and decisive manner, through the Security Council, in accordance with the Charter … where national authorities are manifestly failing to protect their populations.'

(Credit for above right U.N. photo by Mark Garten of U.N. Secretary-General Ban Ki-moon, courtesy of the United Nations)
The commitment also includes action under Chapters VI and VIII, as well as under Chapter VII, and includes cooperation with relevant regional organisations, as appropriate. And of course, the concept is necessarily limited by the legal framework provided under the Charter. Any decision of the Security Council to take action would require the concurring votes of each permanent member. This underscores that R2P does not create any additional exceptions to the prohibition on the use of force under the Charter, – the exceptions being acts in self-defence, and acts authorized by the Security Council.
Most States have agreed that the UN’s role should focus, at the outset, on prevention. The challenge for giving true practical meaning to the concept is thus to work out how the UN can best assist States to protect their populations before crisis situations occur, particularly as there will be situations in which the Security Council will not authorize enforcement action under Chapter VII. This challenge has yet to be met, and of course differs with each unique situation.
R2P gives expression to important international developments
R2P gives expression to what had become a global-wide conviction that it is immoral and unacceptable for States to allow gross violations of the human rights of their populations, and that the international community has a responsibility to prevent these crimes. In this light, R2P has grown out of a number of important developments:
► It reflects a recognition of the changing nature of conflict since the drafting of the Charter in 1945 – today most conflicts occur within States rather than between them.
► It signifies a broad acceptance of fundamental principles of human rights, and reinforces the normative content of the crimes of genocide, war crimes, [ethnic cleansing], and crimes against humanity.
► And it affirms States’ obligations under international law to prevent, prosecute and punish these crimes.
At the heart of R2P is the recognition that state sovereignty – the cornerstone of international relations – entails responsibility. States have a responsibility to protect their populations from the R2P crimes. Building upon this responsibility is the positive obligation which is placed upon the international community to assist States to meet their responsibilities and to take action where these responsibilities are not met. This notion of sovereignty as responsibility underscores that sovereignty is the basis for a certain status and authority under international law, as well as for enduring obligations towards one’s people.
Importantly, rather than detracting from the principle of State sovereignty, R2P reinforces it. It drives home the role of the State as a protector of its nationals. As stated by the Secretary-General, R2P is

'an ally of sovereignty, not an adversary.'

As one of the defining attributes of statehood and sovereignty is the protection of populations; prevention of atrocity crimes begins at home. R2P reinforces the collective security mechanism established by the Charter with its emphasis on prevention, and that enforcement measures may only be taken in accordance with the legal framework prescribed by the Charter.
So some might ask, what is new?
The "added-value" so to speak of R2P, is that it encapsulates the moral and legal imperatives of the international community in relation to the four "R2P crimes". It is a potentially powerful vehicle for an important political process, where political pressure, as well as tangible technical and material assistance, may be brought to assist States to exercise their responsibilities. It places pressure not only on national Governments, but also on actors in the international community. It reflects a marked shift in perspective. While some would argue that R2P has no normative effect, others argue that R2P is an enabling new norm, and, while it is not an obligatory new norm and does not impose binding new duties, it does confer additional responsibility and that additional responsibility includes taking action.

Invocation of R2P regarding Libya
This brings me to the invocation of R2P regarding Libya. In its resolution 1970 (2011), the Security Council [left] recalled Libya’s “responsibility to protect its population”. (photo credit) The international community, both via the UN and other multilateral and bilateral efforts, took a series of measures under pillars II and III to help protect the civilian population from what were described by the Security Council as “widespread and systematic attacks … which may amount to crimes against humanity” – thus framing the attacks within the R2P crimes.
These ranged from diplomatic measures, to the imposition of sanctions and referral of the situation to the ICC, to the Security Council’s authorization under Security Council resolution 1973

'to take all necessary measures to protect civilians and civilian populated areas under attack.'

In the case of Libya, action by the international community was swift, multifaceted and targeted. This was the most explicit and robust application of R2P to date.

R2P in Libya – success or otherwise?
It is arguably premature to pass judgment on the success or otherwise of actions by the international community under “R2P” in the context of Libya. The NATO intervention has been criticized for going beyond the limits of the Security Council authorization, and has fed concerns that R2P was and might be used for “political considerations” – to accomplish “regime change” and to legitimize interference in the internal affairs of States.
At the same time, others have argued that: the limits of authorization were not exceeded; the protection of the civilians in Libya required the drastic action taken; and that many thousands of lives have been saved by the intervention.

Responsibility While Protecting
In an interesting development, in order to address some of the concerns raised in connection with R2P in Libya, last year Brazil circulated a proposal to supplement the concept by a set of principles and procedures on the theme of “Responsibility while Protecting” (RWP). In essence, RWP can be refined into two criteria:
► First, the Security Council, before authorizing any military force, would be required to take into account considerations of proportionality, last resort, and balance of consequences.
► Second, the Council would establish a “monitoring and review mechanism” with respect to the implementation of the use of force under these criteria.
We are, of course, following this discussion with a lot of interest.

Syria
Today, with thousands dead and many more injured, the grave situation in Syria is at the top of the international agenda.
While the concept is very much at the forefront of efforts by the international community to address the current tragedy in Syria, the current humanitarian situation and stalemate in the Security Council is of great concern. Syria is a true test of R2P.
Of course, States and the international community through the League of Arab States and the machinery of the United Nations, have sought to provide assistance and apply pressure via efforts under Pillars II and III.
The Secretary-General has repeatedly called upon the Syrian authorities to stop the violence, and continues to remind Syria of its responsibilities.
► The League of Arab States has adopted a Plan of Action and is highly engaged with regional actors to try to promote a “Syrian led political transition to a democratic, pluralistic political system”.
► The General Assembly has strongly condemned what it has referred to as “widespread and systematic violations of human rights and fundamental freedoms”, and has called upon the Government to immediately halt the violence.
► The UN Human Rights Council has established an independent commission of inquiry to conduct an investigation into violations of human rights law since March 2011.
► States have imposed sanctions.
► The Security Council has condemned the violations against civilians, called for an end to the violence, and for accountability.

► A Joint Special Envoy of the UN and the League of Arab States, Kofi Annan [right], was appointed to focus international pressure to stop the violence, and to facilitate humanitarian access. (photo credit) These are all important efforts to persuade and assist the Syrian authorities to assume their responsibilities.
► The Security Council recently issued a Presidential Statement supporting the Envoy’s 6 point proposal to Syrian authorities, which includes a commitment to ensure sustained cessation of violence; to ensure provision of humanitarian assistance; and to establish a political process to address legitimate concerns of the Syrian people. This has been accepted by the Syrian Government. Implementation remains to be seen.
With regard to the ongoing situation in Syria, it is now too late to prevent the current bloodshed. The challenge for the international community is to find ways to prevent further escalation of the conflict. R2P’s contribution is to underscore the responsibilities of States vis-à-vis their populations, and to pressure and mobilize the international community to help States meet those obligations, – including the taking of collective action where States fail to do so. The Syrian authorities have blatantly disregarded their responsibilities to date. But the international community has not. It is mobilized, and, while much remains to be done, the doctrine of R2P is very much engaged.
On this note, I’d like to leave you with the thought that the doctrine of R2P continues to generate immense pressure not only on the Government of Syria, but also on the international community to take effective action to ensure that the Syrian authorities desist from the violence. It has increased the moral and political pressure on the permanent members of the Security Council. It continues to place moral and political pressure on States and the entire machinery of the United Nations to find a way to end the bloodshed.
Thank you.
by Patricia O'Brien at 4:31 AM