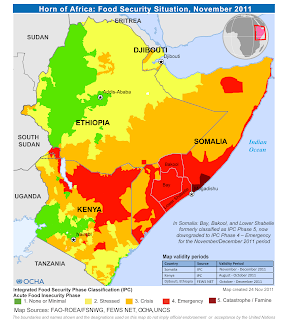 You’ve likely heard how the severe drought in the Horn of Africa has created over 150,000 Somali refugees since July 2011, and how tightening immigration policies have restricted their passage to Europe and North America. But were you aware that thousands more refugees have been cared for exclusively by many African countries for nearly half a century?
The United States should recognize these deserving refugees, too.
Last year, I clerked for the U.N. High Commission for Refugees as a University of California Human Rights Fellow in Addis Ababa – the capital of Ethiopia, and the political hub of Africa. (UN map credit)
In July 2011, Ethiopia and the rest of the Horn of Africa began facing a humanitarian crisis brought on by a severe drought in the region. The drought caused an alarming influx of refugees arriving from Somalia. Meanwhile, as a result of violent clashes in the Blue Nile state of Sudan, Sudanese nationals were seeking asylum through Ethiopia's western border – creating the second refugee emergency in Ethiopia last year. Additionally, we continued to receive asylum seekers from Eritrea, the Democratic Republic of Congo, Djibouti and even Yemen.
I managed over 100 refugee cases  – considering the status of refugees, and also helping to provide protection, in the form of resettlement referrals, for refugees who were particularly vulnerable in Addis Ababa, such as women at risk. In addition, I participated in collaborative emergency meetings with representatives from various U.N. agencies and their implementing partners who were responding to the Somali refugee crisis.
Refugee recognition is vital to the protection of human rights. I learned, however, that refugees are defined more broadly in many African countries than by most of the international community. As a result, many refugees – particularly Somali refugees – who were recognized as such by Ethiopian authorities would not have been recognized as refugees under U.S. criteria.
First, some basic refugee concepts should be reviewed.
An asylum-seeker is a person seeking refuge in a foreign country. If she proves to have a well-founded fear of returning to her home country for a qualifying reason, then she may be recognized as a refugee. Importantly, international law forbids the deportation of refugees. However, the definition of a refugee varies in breadth depending on which legal instrument is consulted.

The United States, like most countries in the world, is a signatory to the 1951 U.N. Refugee Convention (as it is incorporated by the 1967 Protocol), which narrowly defines refugees as persons fleeing targeted or discriminatory persecution due to race, religion, nationality, political opinion, and/or membership of a particular social group. (credit for UN photo of signing of 1951 convention)
In 1960, 41 members of the African Union pioneered the way to broadening the definition of a refugee – they additionally signed the Organization of African Unity Refugee Convention. The OAU Convention further extended refuge to people fleeing generalized violence.
With the introduction of the 1984 Cartagena Declaration on Refugees, many Latin American nations also began recognizing generalized violence as a legitimate refugee ground.
But depending on where refuge is sought, those fleeing generalized violence may not have legal basis to protect them against deportation.
Somalis, for example, have suffered anarchy and violent conflict since 1991. Most Somalis fleeing general violence will be granted refuge exclusively under the OAU Convention. If those same Somalis fled to the United States, they would likely be denied asylum, solely because the violence they fled was not targeting them on protected grounds; however, the danger they face in Somalia is real nonetheless.
An increasing number of Mexicans flee drug-related violence – which has killed 45,000 people since 2006 – and seek refuge in the United States. But the United States rejects 96% of Mexican asylum petitions, often on the basis that they do not fit our narrow refugee definition, despite challenges by legal observers. And since Mexican asylum claims are adjudicated fastest, we end up swiftly deporting asylum seekers to the life-threatening conditions they sought to escape. Incorporating generalized violence, as a refugee ground, into our definition would protect many deserving Mexican asylum-seekers in the United States from deportation.
Refugees managing to fall within the United States’ protection are among the most fortunate, receiving superior benefits such as a solid pathway to local integration, material assistance like health care, and equal access to education and employment.
If our only remaining option is to deport asylum-seekers to where they face serious threats to life or liberty, then the tradeoff between quality and quantity of the protection offered is improperly balanced, and we should broadly cut benefits so that we may broadly extend refuge to deserving cases.
We generously care for refugees we recognize. But we ought to recognize more refugees. By expanding the refugee definition, the United States can join its African and Latin American counterparts and protect more refugees. Our legal definitions should assist, rather than restrict, us. Otherwise, we cannot possibly fulfill our humanitarian obligation to the world’s most vulnerable people.
by Jihan A. Kahssay at 5:00 AM