Attending to the language of justice

(Part 2 of a 2-part series of introductory posts; Part 1 is here)

International Criminal Court Prosecutor Luis Moreno-Ocampo (left) sought to establish a workable frame through to initiate and successfully prosecute cases in a way sensitive to local cultural realities, without sacrificing the court’s mission. But as he realized, the ICC must be committed both to the prosecution of crimes – that is, “the most serious crimes of concern to the international community as a whole,” as Article 5 of the Rome Statute puts it – and to the shifting, often contested terrain within which the Court was forced to operate.
The Prosecutor found an opening in Article 53 of the Statute, which outlines the conditions under which the Court can decline to begin a prosecution. Among the conditions, the Article creates an ambiguous limiting condition around the “interests of justice.” 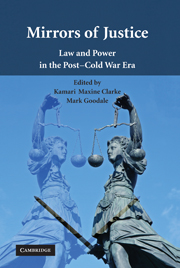 As George Mason University anthropologist Mark Goodale and I write in our introduction to the 2011 essay collection we co-edited, Mirrors of Justice: Law and Power in the Post-Cold War Era, Article 53 fails to specify:
► What kind of “interests” the Court should consider; and
► For what kind of “justice” these unarticulated interests work.
The provision “in the interests of justice” has developed in the Office of the Prosecutor into a complicated mechanism for mediating tensions between an abstract universality and actual contingencies within which the ICC investigates and prosecute its cases. For some, Article 53 provided the opportunity to allow prosecutorial discretion to consider the political ramifications of ICC-judicial action. For others, “justice” is idealistic, and the interpretation of the “interests of justice” provision should be exercised in restrictive terms. In the end, the Policy Paper on the Interests of Justice that the Office of the Prosecutor issued in September 2007 set a standard for action that involved balancing the interests of victims, peace, and judicial action.
This balance was not achieved with regard to the situation in Uganda, however.
I detailed the early stages of this situation, including efforts at peace talks and Uganda's December 2003 decision to refer the matter to the ICC, in my post yesterday. Between March 2004 and November 2005, alongside criticism from victims' groups in Uganda, the ICC Office of Prosecutor sought to work with some Ugandan organizations to achieve a range of peace goals. In so doing, it made clear that its role was not that of peacekeeping but was adjudicatory. Moreno-Ocampo was explicit that the ICC’s contribution to securing peace was in the Ugandan prosecution alone.(Later, in the Darfur situation, prosecutors shifted the onus of responsibility for maintaining peace to the U.N. Security Council. Again, responsibility for peace was pushed elsewhere.)
By insisting on the artificial division between politics and adjudication, the Office of the Prosecutor maintained that Uganda’s peace negotiations fell outside of the realm of its judicial mandate. Thus, while the position paper on Article 53 may map out particular possibilities that offer significant discretion for action, the reality is that by upholding binary divisions – divisions that locate peace as political and justice as embedded in the terrain of the legal – the end result was the reinforcement of social myths about peace and justice.
Focusing on individual criminal responsibility in the midst of larger systematic conditions of violence actually contributes to the denial of the political basis for justice. As I demonstrate in my 2009 book Fictions of Justice: The International Criminal Court and the Challenge of Legal Pluralism in Sub-Saharan Africa, these fictions of justice lie at the heart of the assignment of criminal responsibility to a single individual. They are a significant part of the power of the Kony 2012 discourses being mobilized in pursuit of humanitarianism in Africa.

The Uganda-ICC contestations over justice, like the Kony 2012 video on which I also posted yesterday, highlight the fact that the ICC’s agenda, and the language deployed by human rights/rule of law advocates, have afterlives that go well beyond the enactment of the law and the courtroom. They shape the conditions of the possible, of what can be mobilized. They shape the terms on which life and death are selectively parsed.
Whether our goal is simply to establish doctrinal decisions that might deter violence, or to rectify the structural problems that undergird that violence in the first place, attending to the language of justice is a critical start.
by Kamari Maxine Clarke at 6:00 AM