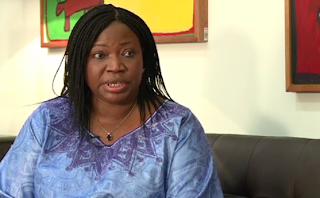 A lot of "B"s in one interview playing today at the Beeb.
Interviewed was Fatou Bensouda, who will become Chief Prosecutor of the International Criminal Court on July 1.
Karen Allen of the BBC  talked with Bensouda on the fringes of a conference in Cape Town, South Africa. Africa and the ICC, a theme on which we've frequently posted, thus was at the core of the interview. (Video, from which above image of Bensouda was made, is available here.)
The name of Bashir of course came up. That would be Omar al-Bashir, who has remained President of Sudan despite the years-old ICC warrant for his arrest. Some countries that belong both to the ICC and the African Union have allowed him safe passage; recently, one of them, Malawi, has reversed course and sought to ban Bashir.
On this, Bensouda said:


'[T]he step that Malawi has taken is very encouraging. We have of course had other African countries that have done similar things. I think Botswana has been very consistent in the position of arresting Bashir if he were to go to Botswana.
'But I also want to make one thing clear. What is out there in the media, mostly, is that African Union is not cooperating with the ICC. And of course there are certain examples why this is said. But I want to say that we have had tremendously good cooperation with individual African states.'

This comment moved conversation to another name, Bosco – Bosco Ntaganda, charged with war crimes when he, like his then-co-accused, Thomas Lubanga, was a Congolese rebel leader. Lubanga awaits ICC sentencing, having been convicted of recruiting child soldiers. Ntaganda managed not just to escape arrest, but also to become a general in the government's army, and so to wield much power. Earlier this month, the ICC added charges against Ntaganda, who reportedly "mutinied" in April and is now forcing children to join his new combat against the government.
On this, Bensouda said:


'[T]hose who have warrants out for them, for their arrest, should be arrested and surrendered to the ICC. This level of "blackmail," which I call it, in which perpetrators are saying that "If you do not drop warrants against me, or if you issue warrants against me, I continue to kill people," I think this is what the international community, especially those who are directly responsible for the arrest of Bosco, should take into account.'

Finally the BBC interview of Bensouda evoked the name Barack – President Barack Obama, who's deployed U.S. troops to Uganda to aid "the removal of Joseph Kony from the battlefield." On this, Bensouda reminded that the ICC relies on states to execute its warrants, including the years-old one for Lord's Resistance Army leader Kony, subject of a NGO-issued viral video, about IntLawGrrls have posted.
On the U.S. role, Bensouda said:


'It is not directly an assistance to the ICC as such, if I may put it that way. It is a request from Uganda, not from the ICC, from Uganda as a state. And also it is a push by Invisible Children on the United States government to do something. ... [T]he Kony 2012 video has done a lot to bring attention to this.'

Asked by the BBC if she thought the United States would ratify the ICC Statute should Obama win re-election this November, Bensouda gave a most politic reply:


'I have refrained from commenting on any state that is not party to the Rome Statute. But I do know that the universality of the court is a good thing for international criminal justice.'