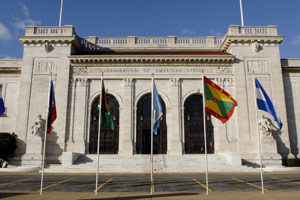 The regional human rights system of the Organization of American States is under attack.
Venezuelan President Hugo Chávez, struggling against both cancer and an emboldened opposition, is making a high-profile push for Venezuela to withdraw from the Inter-American Human Rights Commission.
The Presidents of Bolivia, Ecuador and Nicaragua have joined Chávez in calling for the creation of an alternative regional human rights system sans United States and Canada.
And even the more centrist Latin American leaders are taking shots.
A group of states including Brazil and Peru have asked the OAS to curb the Commission’s power to issue preliminary measures.
President Dilma Rousseff of Brazil  temporarily withdrew the country’s envoy to the OAS last year after the Commission called on Brazil to halt work on the massive Belo Monte dam.
President Ollanta Humula of Peru accused the Commission of exceeding its mandate by referring to the Inter-American Court of Human Rights a highly polemical case still stalled in Peru’s courts. He seemingly vowed to defy any future Court order for Peru to punish those responsible for the crimes at issue.
Are these threats serious?
► On the one hand, ire from political leaders is nothing new to the Inter-American system, and arguably even a symptom of its effectiveness. Like muckraking journalists, perhaps human rights bodies are at their best when everyone is mad at them.
Much of the pushback, at any rate, is symbolic politics.
► On the other hand, the threat from Chávez (prior IntLawGrrls posts) may be genuine cause for concern.
Chávez, who seems to be losing his battle against cancer, recently constituted a Council of State, the Venezuelan Consejo de Estado, and announced that its first order of business should be Venezuela’s withdrawal from the Inter-American Commission. (credit for above photo of OAS headquarters in Washington, D.C., where Commission meets; credit for photo below of Inter-American Court headquarters in San José, Costa Rica)
It is not clear what this would mean. As OAS Secretary General Miguel Insulza pointed out, there is no mechanism for withdrawing from the Commission: the Commission was created pursuant to the OAS Charter, so perhaps the only way is to withdraw from the OAS itself.
The Council of State is still studying the matter.
That Venezuela denounced the Convention on the Settlement of Investment Disputes between States and Nationals of Other States last January shows that Chávez’s threats are not idle.
More troubling still is that Chávez is a regional trendsetter. 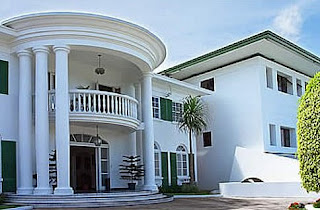 His closer allies, including Ecuador’s President Rafael Correa, Bolivia’s President Evo Morales, and Nicaragua’s President Daniel Ortega, could try to follow suit. All of them have been targeted by the Commission for their suppression of media freedom of expression, and all have voiced exasperation with a system which, they claim, is unduly influenced by the regional hegemon (that would be the United States, which, though an OAS member, has not given jurisdiction to the Court, and mostly ignores the Commission’s opinions).
Venezuela’s withdrawal would be a serious blow.
As noted in a letter of protest from over 200 concerned academics (among them, IntLawGrrls contributors Caroline Bettinger-López and me, Alexandra Huneeus):

'The "exit" of Venezuela will seriously weaken the mechanisms for the protection of human rights for all Venezuelan men, women, and children, depriving them of an indispensable instrument for their protection.'

Such an exit would also weaken one of the world’s few successful attempts at establishing a regional human rights order.
Latin America has a proud history of regional cooperation towards construction of a human rights regime through the OAS, and it has been a pathbreaker:
► The American Declaration of The Rights and Duties of Man predates the Universal Declaration of Human Rights. And as Harvard Law Professor  Mary Ann Glendon demonstrated in her 2003 article The Forgotten Crucible: The Latin American Influence on the Human Rights Idea, in many ways the American Declaration influenced the later, global one.
► Under the auspices of the OAS, the Commission and Court have forged a body of jurisprudence on abuse of state power to which high courts in countries across the region, along with the European Court of Human Rights, regularly turn as authority.
Supranational institutions are not created overnight. It would be a loss if, in order to advance the political agenda he calls the Bolivarian Revolution, Chávez damages one of the institutions that most closely embodies Simón Bolívar’s vision of Pan-American unity.
by Alexandra Huneeus at 6:00 AM

Similar to its position with regard to the International Criminal Court, the U.S.'s decision to ignore IACHR jurisdiction gives populists like Chávez an argument to give themselves the same sort of exemption from supranational human rights bodies. This article alludes tangentially to this point, but it is really hard to imagine Chávez convincing others to follow his lead if the U.S. were not playing this hypocrticial role within the IACHR and OAS.

Yes, I agree. Chavez is quick to point out that even as the Commission is based in the United States and subject to its influence through the OAS, the US does not subject itself to the Court’s jurisdiction, and tends to ignore the Commission as well. So he effectively depicts the US as shaping the Commission’s agenda while exempt from its oversight. Professor Doug Cassel eloquently made this point in Opinio Juris.

This recent tack toward a purported withdrawal from the IACHR seems to be a legal impossibility, akin to -- and even less legally possible than -- Fujimori's attempt to withdraw from the contentious jurisdiction of the Inter-American Court. This post correctly identifies the power of this rhetoric in this trying moment for the Inter-American System.

The first comment is correct -- ACHR ratification by the US (and the other remaining 9 countries, mostly in the English speaking Caribbean) would take a major rhetorical advantage away from Chávez, Correa, et al. Universalization of Convention ratification was one of the three main challenges to the IACHR (other than compliance and funding) that Executive Secretary Canton alluded to in his closing remarks.