By means of a fascinating application of complementarity under the Rome Statute of the International Criminal Court, South African prosecutors must investigate allegations of torture committed in Zimbabwe.
So ordered the High Court of South Africa Tuesday, in its judgment in South African Litigation Centre and Zimbabwe Exiles Forum v. National Director of Public Prosecutions and other government units.
Complementarity, of course, is the principle that allots jurisdiction over crimes punishable under the 1998 ICC Statute; specifically, genocide, war crimes, and crimes against humanity. (As posted earlier this week, the crime of aggression may one day be added to that list.) The statute's preamble states:


'[T]he International Criminal Court established under this Statute shall be complementary to national criminal jurisdictions.'

The global community thus looks first to countries to pursue persons suspected of ICC crimes.
And Tuesday's ruling requires one national system to do just that. 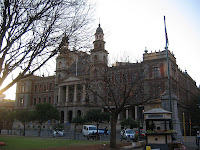 In his 98-page judgment, Pretoria-based High Court Judge Hans-Joachim Fabricius reversed prosecutors' 2008 rebuff of the request from 2 applicant NGOs for an investigation into "into acts of torture as crimes against humanity committed by certain named perpetrators in Zimbabwe."
Of special note:
The national order for a transnational investigation issued notwithstanding the fact that the ICC itself cannot exercise jurisdiction over acts in Zimbabwe, a state not party to the ICC statute.
As IntLawGrrl Naomi Roht-Arriaza further discusses today in her post from Johannesburg, the applicants sought investigation of an event alleged to have taken place on March 27, 2007, in Harare, Zimbabwe's capital. Paragraph 8 of the judgment states:


'Zimbabwean police, under orders from the ruling party, the Zanu-PF, raided the headquarters of the opposition party, the Movement for Democratic Change (“MDC”). Over one hundred people were arrested and taken into custody, amongst them were MDC supporters and officials, as well as persons who worked in near by shops and offices. Individuals affiliated to the MDC were detained for several days, and were continuously and severely tortured ... on the basis of their association with the MDC and their opposition to the ruling party.'

It's further alleged that these acts of torture were "'inflicted by – and at the instigation of and/or consent or acquiescence of public officials" as "part of a widespread and systematic attack on MDC supporters and officials and those opposed to the ruling party, the Zanu-PF."
Authority for the court's order is twofold: South Africa's Constitution and a South African statute, the Implementation of the Rome Statute of the International Criminal Court Act 27 of 2002.
Here's the reasoning by which applicants successfully invoked South Africa's ICC Act:


'[I]n the light of the collapse of the Rule of Law in Zimbabwe, concern for the safety of the victims, and the unlikely-hood of securing accountability in a Zimbabwean court ... South Africa was legally required to investigate war crimes, crimes against humanity and genocide, regardless of whether they were committed in South Africa or by South African nationals, those responsible could and should be held accountable under South African law designed for this very purpose.'

One hears echo of the "unwilling or unable" requirement of complementarity as set forth in Article 17(a) of the Rome Statute.
The Pretoria court agreed with applicants' reasoning.
Referring to respondent prosecutors by assigned numbers, it stated in paragraph 29:


'In the present context it was the duty of the First, Second and Fourth Respondents to investigate the docket. It contained sufficient information for purposes of such an investigation, in the context of the Rome Statute. At that stage, it was not their obligation to take political or policy considerations into account. These change in any event from time to time, whilst a proper jurisprudence remains a concrete basis for a stable society living under the twinkling but stern eyes of the Rule of Law. Any such considerations would affectively destroy the efficacy of the ICC Act.'

The court order concluded by instructing various governmental agencies on their obligations to,


'in so far as it is practicable and lawful, and with regard to the domestic laws of the Republic of South African and the principles of international law, do the necessary expeditious and comprehensive investigation of the crimes alleged in the torture docket.'

Will be well worth watching as this deployment of a national system in service of global criminal justice plays out.