Executive action at the United Nations, a basis for the concept of responsibility to protect

(My thanks to IntLawGrrls for the opportunity to contribute this introductory post, part of a 2-part series based on a paper that will appear in the 2012 American Society of International Law Annual Meeting Proceedings) According to UN Secretary-General Ban Ki-moon (right), while the responsibility to protect concept came of age in 2011, the challenge facing the international community remains that of transforming the concept from ‘promise to practice’ or from ‘words into deeds’. In my view, the significance of the concept lies in its capacity to do the reverse – that is, to transform practice into promise, or deeds into words.
More specifically, the responsibility to protect concept offers a framework for rationalising and consolidating practices of international executive rule, many of which were developed by Dag Hammarskjöld (below left), the second Secretary-General of the United Nations, in the early years of decolonisation. (UN photo credits here and here)


Practices of protection: Executive action & the UN Charter
The idea that the UN has a responsibility to protect life in the decolonised world began to take shape with two operations that were undertaken while Hammarskjöld was in office:
► UNEF, the UN Emergency Force in response to the Suez crisis of 1956; and
► ONUC, the UN Operation in the Congo in 1960.
The techniques of executive rule developed under Hammarskjöld’s auspices during those early crises of decolonisation – fact-finding, peacekeeping, strategic forms of technical assistance, and civilian administration – have, of course, since expanded dramatically. Yet as Hammarskjöld recognised, little in the UN Charter suggests its authors envisaged the creation of an international executive that could undertake such wide-ranging forms of action. 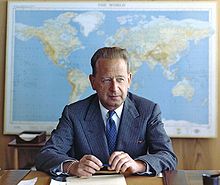 In the Introduction to his 1961 Annual Report to the General Assembly (accessible here), Hammarskjöld noted that although ‘great attention is given’ in the UN Charter to elaborating ‘the parliamentary aspects of the Organization, little is said about executive arrangements’. To the extent that there exists an explicit legal basis for these forms of executive action, Hammarskjöld found it in the provisions of the Charter entrusting the Secretary-General with the execution of political decisions at the request of the political organs, and in Article 99, which provides that the Secretary-General


'may bring to the attention of the Security Council any matter which in his opinion may threaten the maintenance of international peace and security.'

Hammarskjöld (prior IntLawGrrls posts) interpreted these provisions as giving the Secretary-General a position of full political independence and a broad discretionary mandate to engage in fact-finding, preventive diplomacy, and other behind-the-scenes activity necessary to carry out his functions. He thus did not interpret the limited attention in the Charter as a constraint on executive action. Rather, he considered that ‘the executive functions and their form have been left largely to practice’. He argued forcefully that it was necessary to stop thinking of the UN merely as a forum for ‘static conference diplomacy’ and instead reimagine it as a ‘dynamic instrument’ for ‘executive action, undertaken on behalf of all members’. And he emphasised the ‘margin of confidence’ that ‘must be left to those who will carry the responsibility for putting the decisions’ of the political organs ‘into effect’.
International lawyers in the 1950s and ’60s were well aware of the potentially radical effect of this expansion of international executive action. For example, Stephen Schwebel presciently commented in his 1961 book The Origins and Development of Article 99 (p. 382):


'Perhaps it is not too much to suggest that, as the development of the great national civil services profoundly affected the national histories of the nineteenth and twentieth centuries, so the growth of the powers of the international executive may in time influence the future course of world affairs.'

Similarly Oscar Schachter, in an American Journal of International Law article written in 1962, soon after Hammarskjöld’s death, suggested that the expansion of ‘executive action’ was ‘widely regarded as constituting a major feature’ of Hammarskjöld’s legacy. Schachter argued that such “‘operational” measures’ were clearly related to international law’, because they created ‘new conceptions of permissible and impermissible interference’ as well as new conceptions ‘of the Charter obligations for mutual assistance and co-operation’.
The radical implications of Hammarskjöld’s expansion of executive action were also not lost on governments at the time. In a confidential memo written to the British Foreign Office after Suez, Sir Pierson Dixon, the British Ambassador to the United Nations, concluded:


'The outcome of this crisis has left the Secretary-General more than a symbol or even an executive: he has become a force.'

(Tomorrow, Part 2 of the series: International authority and the responsibility to protect)
by Anne Orford at 5:00 AM