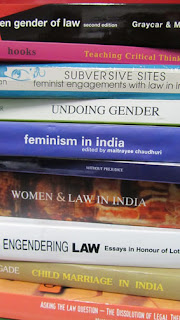 Not long ago, while most of us here in the United States were fighting off the dreary days of winter, I was a world away in the sunny and energetic college town of Pune, India, about three hours southeast of Mumbai.
I was there to present at the inaugural International Conference on Feminism and Law, at the ILS Law College. The theme for the conference was “Revisiting the Past, Rethinking the Present, and Thinking the Way Forward,” and with topics ranging from gender violence to globalization to reproductive technology, there was a lot to explore, debate, and discuss. (credit for image from conference webpage)
The conference brought together academics, lawyers, researchers, students, and activists from around the world, including presenters from Australia, Canada, Lebanon, Egypt, South Africa, the United Kingdom, the United States, Japan, Mauritius, and of course, India. All of the participants and presenters brought a wealth of knowledge and experience to the proverbial table. I consider myself very fortunate to have had the opportunity to spend three days (mostly) listening and (sometimes) talking with such talented, accomplished, smart, and congenial people. 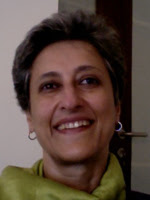 There were also several feminist heavy-hitters on hand to pose difficult, probing questions and to present rousing keynote addresses, including Ratna Kapur (left, Executive Director and Research Head of the Centre for Feminist Legal Research, based in New Delhi, India), Professor Rosemary Hunter (Kent Law School, England), Professor Margaret Thornton (below right, from Australian National University College of Law), and Flavia Agnes (attorney and India-based Fellow at Ashoka, a global nongovernmental organization).
I think I spent most of the conference realizing how little I really know about the ways in which women struggle all over the world, not just for equal legal rights or equal social status, but for the most basic of human rights – safety from physical harm. I was oftentimes saddened by stories of the shocking incidence of sexual violence and other atrocities perpetrated against women throughout the world every day, but so incredibly heartened by the knowledge that there are so many devoted women and men out there who want to change the world for the better. 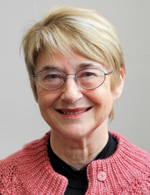 I was most impressed and most encouraged by the students of the ILS Law College, who devoted an extraordinary number of volunteer hours to putting the conference on and who also presented some of their own well-developed and well presented scholarly work.
And of course, as a wannabe feminist author and activist myself, I drew a great deal of inspiration from the incredibly knowledgeable presenters, and spent much of my time scribbling ideas for research that I would like to pursue in the near future.
For my part, I presented a paper entitled The Impact of Globalization on the Fight for Equality: How Participation in the Global Economy can Improve the Rights of Women in the Middle East and North Africa. The paper:
► First reports on the ways in which economic globalization can improve women’s lives on a macro- and a micro- scale through the creation or expansion of women’s agency and social capital (although I certainly do not dispute the past and current negative impact of globalization on women).
►Then looks at how socio-cultural and legal factors – such as gender differences with regard both to time and to resource constraints, as well as social, religious, or legal restrictions on women’s freedom of movement – can limit the positive impacts of globalization.
►Next focuses on women’s status in the MENA (Middle East and North Africa) region.
It begins to explore how an Islamic feminist interpretation of the Qur’an may be necessary to allow women in the Middle East unfettered or, at least, less-fettered access to the marketplace so they might take advantage of the benefits of economic globalization.
Based on questions and feedback from my fellow presenters and audience members, I am working on some revisions to my paper and hope to publish it soon. Research papers from the conference will be published in a forthcoming book, and I hope my paper will be among them. I will be sure to update blog readers with information on the book or publication of my paper as it becomes available. 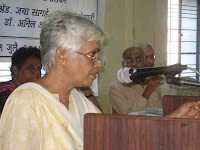 I am truly grateful to the students and faculty of ILS Law College, including Vice-Principal Jaya Sagade (left), as well as the folks over at University of New South Wales and the University of Technology Sydney, for putting this conference together and allowing me to be a part of it. (credit for 2010 SATHI photo) I hope that one day, I can look back on this conference as the first of many that I took part in and as an important first step for me along my own feminist legal journey.
by Sarah Stephens at 5:00 AM