It's our great pleasure to welcome Kate Jastram (left) as an IntLawGrrls contributor.
A Lecturer in Law and Senior Fellow at the University of California, Berkeley, School of Law, since 2002, as of July 1 Kate will become Director of Research and Programs of Berkeley Law's Miller Institute for Global Challenges and the Law.
Before joining Berkeley's faculty, Kate had spent a decade in Geneva and Washington, serving as a legal advisor to the U.N. High Commissioner for Refugees. Kate's also taught at the International Institute for Humanitarian Law in Sanremo, Italy, and she was co-recipient of the 2005 Arthur C. Helton Human Rights Award given by the American Immigration Lawyers Association.In 2009, she co-wrote a U.S. Supreme Court amicus brief on behalf of UNHCR in Negusie v Mukasey, an asylum case on which IntLawGrrl Jaya Ramji-Nogales has posted.
Kate's teaching and scholarly writings concern refugee law and global migration, human rights law, international humanitarian law, and international criminal law.
In her introductory post below, Kate discusses a recent Berkeley Law symposium on the Internet and the laws of armed conflict.
Kate earned a B.A. summa cum laude in European History from San Francisco State University, an M.A. in Women’s History from Sarah Lawrence College, and a J.D. from Berkeley Law, after which she practiced immigration and nationality law in San Francisco and directed a pro bono asylum program in Minneapolis.
Her professional service includes: Executive Committee member, American Society of International Law Lieber Society on the Law of Armed Conflict; member, American Bar Association Commission on Immigration Reform Task Force on Civil Detention Standards; and associate rapporteur, Human Rights Nexus Working Party for the International Association of Refugee Law Judges.

Kate wishes to honor Aphra Behn (right), about whom we've posted here.
Behn, who was born in Canterbury, England, in 1640 and died in London in 1689, was, Kate writes, "a Restoration novelist, dramatist and spy, who was one of the first English women to earn her living by her pen." (credit for images at right and below) Kate further notes that Virginia Woolf (prior IntLawGrrls posts) wrote of Behn in her own landmark book, A Room of One's Own (1929): 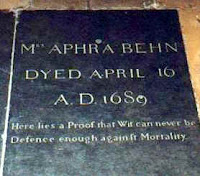 'All women together ought to let flowers fall upon the tomb of Aphra Behn, which is, most scandalously but rather appropriately, in Westminster Abbey, for it was she who earned them the right to speak their minds. It is she – shady and amorous as she was – who makes it not quite fantastic for me to say to you tonight: Earn five hundred a year by your wits.'