"Liechtenstein geht international voran," boasted a headline in today's edition of the largest daily newspaper in Vaduz.
Occasioning this claim that "Liechtenstein leads the way internationally" was the announcement that yesterday, on the 67th anniversary of the end of World War II, Liechtenstein became the 1st state to ratify the Kampala amendments that would make the crime of aggression fully punishable by the International Criminal Court.
Martin Meyer, Deputy Prime Minister of the centuries-old principality, where today a little over 36,000 people occupy a space about the size of Washington, D.C., said:


'Especially for small states, legal protection against wars of aggression is of enormous importance. I am proud that today we can continue our leadership on this issue.'

Liechtenstein indeed has been a leader in moving toward definition and, perhaps, eventual activation, of the crime of aggression – an offense placed within ICC jurisdiction via the 1998 Rome Statute, by dint of Article 5(1), yet, by dint of Article 5(2), not then activated. (Here is IntLawGrrls' series of posts on the crime of aggression.)
Christian Wenaweser, the Ambassador Extraordinary and Plenipotentiary who's been Liechtenstein's Permanent Representative to the United Nations since 2002,served as chair of negotiations respecting the crime of aggression from 2003 to 2009 and, in his capacity as President of the Assembly of States Parties from 2008-2011, as leader of the ICC Review Conference. That 2010 Uganda meeting, on which many IntLawGrrls then posted, produced a package of amendments not only on the crime of aggression, but also on extension of certain bans on poisonous gases to non-international as well as international armed conflicts.
Thus in New York yesterday, Wenaweser's successor as Assembly President, Estonian Ambassador Tiina Intelmann, said as she accepted Liechtenstein's ratification documents from him:


'It is particularly fitting that Liechtenstein, which played such a crucial role in the negotiation of these amendments, should be the first to ratify them. I encourage other States Parties to do the same and hope for the earliest possible entry into force of the amendments.'

(credit for above (c) UN photo by Benoit Marcotte) To date, San Marino is the only other country to have ratified any part of the Kampala package – not the crime-of-aggression part. 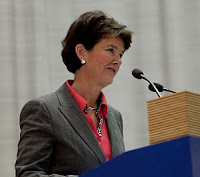 But there is movement toward the goal that Intelmann articulated.
In Berlin in March 14, the German Ministry of Justice hosted a "VStGB konferenz" – that is, a conference aimed at exploring how the crime-of-aggression package might be incorporated into the statute known by its German acronym VStGB, which implements the Rome Statute domestically.
In opening the conference, the Ministry's State Secretary, Dr. Birgit Grundmann (left), referred to the negotiated agreement embodied in the Kampala package, and said:


'Despite the compromises, there are still skeptics who ask whether the time is really ripe for this extension of the Rome Statute. We do not share this skepticism. Germany will ratify the amendments to the ICC Statute quickly and comprehensively. Here we are already well on the way.'

Noting that by the terms of the Kampala amendments the crime of aggression could not be activated any earlier than 2017, Grundmann cautioned that the Ministry would take advantage of that time frame to assure proper domestic legislative implementation of the package. (credit for 2011 photo)
(Sounding a theme that runs throughout his excellent new book, Unimaginable Atrocities, in his own blog post today our colleague William A. Schabas exhorts the many ICC-friendly nongovernmental organizations that so far have stayed on the sidelines to begin to push for full ratification of the Kampala package.)

Among the participants at the March conference in Berlin was ICC Judge Hans-Peter Kaul (left), formerly the Head of the Public International Law Division of Germany's Federal Foreign Office and leader of the German delegation at the 1998 Rome Conference. As we've written in posts available here, Kaul has written and spoken strongly in favor of making fully punishable before the ICC the offense about which the post-WWII Judgment of the International Military Tribunal at Nuremberg stated: