Well, that was quick.
Scarcely had a defense motion to disqualify a judge been denied before that judge turned 'round and granted another defense motion – "a ruling that throws the future of the trial into question."
So says a just-issued Associated Press dispatch from the International Criminal Tribunal for the former Yugoslavia at The Hague. (credit for photo of ICTY)
It reports that ICTY Judge Alphons Orie, presiding at the trial of former Bosnian Serb General Ratko Mladić, 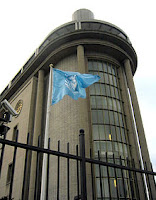 'said he was delaying the Yugoslav war crimes tribunal case due to "significant disclosure errors" by prosecutors, who are obliged to share all their evidence with Mladic's defense team. He said judges are still analyzing the "scope and full impact" of the error and aim to establish a new starting date "as soon as possible."'

The decision today came amid opening arguments, and just 2 days after ICTY President Theodor Meron denied a motion to disqualify Orie from the case. It reflects a recurring problem in international criminal adjudication, a fact rather painfully reflected in the AP sidebar entitled "Glance of delayed international war crimes cases."
Time frames for a Mladić trial restart seem to run into many months. No small thing given that Mladić, who was indicted in 1995 and arrested in 2011, is 70 years old and not in the best of health.
by Diane Marie Amann at 11:17 AM