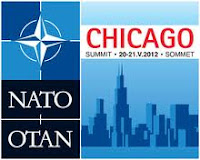 '[C]losely following the laws of war is in our strategic interest. It undermines those who accuse the U.S. of hypocrisy and helps win the support of those who hold the same ideals.
'The best course for the United States – and its NATO allies – is to pledge this weekend in Chicago to more strictly abide by the laws of war they have created.'

–  Reuters columnist and Pulitzer Prizewinner David Rohde, in  Ending NATO’s double standard, a commentary that urges the United States to join 121 other countries in ratifying the Rome Statute of the International Criminal Court, among other acts that would help to take the sting out of complaints that it's hypocritical on matters of international criminal justice. Rohde's piece coincides with the Chicago summit meeting of member states of NATO, the 28-state North Atlantic Treaty Organization. The summit, in President Barack Obama's hometown, runs through Monday.
by Diane Marie Amann at 12:14 PM