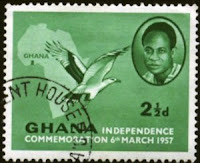 On this day in ...
... 1956, in the House of Commons in London, Britain's Colonial Secretary announced that Britain stood ready to grant an African colony independence. Back then it was known as the Gold Coast. Today it's Ghana, which became independent the following year -- the 1st British colony in Africa to do so -- and "'made a complete break'" a few years after that. (credit for stamp commemorating Ghana's independence and 1st leader, Kwame Nkrumah)