On this day in ...
... 1861, Queen Victoria proclaimed Britain neutral in America's Civil War: 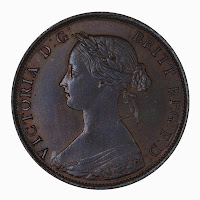 '[W]hereas hostilities have unhappily commenced between the Government of the United States of America and certain States styling themselves the Confederate States of America ; and whereas we being at peace with the Government of the United States have declared our royal determination to maintain a strict and impartial neutrality in the contest between the said contesting parties ; and we do hereby strictly charge and command all our loving subjects to observe a strict neutrality in and during the aforesaid hostilities and to abstain from violating or contravening either the laws or the statutes of the realm in this behalf, or the laws of nations thereto, as they will answer to the contrary at their peril.'

British traders who breached the proclamation by choosing sides risked "our high displeasure"; ostensibly, fines or imprisonment. (credit for photo of 1861 British halfpenny depicting Victoria) On the one hand the proclamation, which other European countries followed with their own decrees, granted Confederates belligerent rights and thus allowed British trade to continue throughout North America; on the other hand, it denied them full statehood recognition.