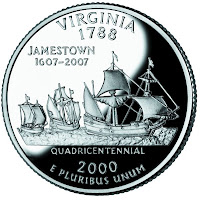 On this day in ...
... 1607 (405 years ago today), "London entrepreneurs" who'd secured a charter from English King James I laid claim to land on the North American continent when the hundred settlers they'd sent completed a several-month voyage by landing on an island off the coast of what's known the United States Commonwealth of Virginia. Naming it Jamestown Island, they set to establish a colony. For a while Jamestown was the capital of the Virginia colony; the capital moved to Williamsburg in 1968, and "Jamestown began to slowly disappear above ground." The colonial site's now under excavation -- and part of a Virginia "historical triangle." (credit for photo of U.S. quarter)