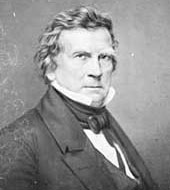 On this day in ...
... 1855, the U.S.-Canada Reciprocity Treaty took effect by proclamation of U.S. President Franklin Pierce. The treaty had been concluded the previous year, when, on June 5, the 7-article pact was signed by 2 diplomats – William Learned Marcy (left), U.S. Secretary of State, along with the Governor General of what was then known as  British North America, James Bruce, who held the titles of the 8th Earl of Elgin and the 12th Earl of Kincardine (below). 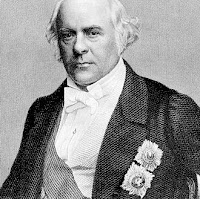 Accordingly, it's sometimes called the Marcy-Elgin Treaty. (image credits here and here) The agreement granted Americans rights to fish in Canada's coastal waters. "At first the treaty was popular in both countries, but owing to a combination of political and economic factors it became unpopular in the US," and "ceased to be operative" there by March 17, 1866.