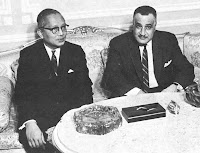 On this day in ...
... 1967 (45 years ago today), during what's now known as the Six Day War, troops led by President Gamal Abdul Nasser (near left) of Egypt occupied posts held by the U.N. Emergency Force and demanded the immediate withdrawal of UNEF troops from the Sinai, according to a later report by U.N. Secretary-General U Thant (far left), a Burmese who would serve in that position from 1961 to 1971. A formal governmental request for withdrawal of the 1st-ever U.N. peacekeepers came the next day, and "with 'serious misgivings'" (according to a quote in The New York Times), the Secretary-General complied. (credit for May 1967 photo)