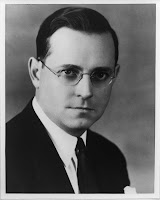 On this day in ...
... 1952 (60 years ago today), the Acting Legal Adviser of the U.S. Department of State, Jack B. Tate (left), issued a statement on U.S. policy respecting foreign states' claims to sovereign immunity from lawsuits in courts of the United States. The Tate Letter announced a shift away from an absolute theory of immunity, by which foreign states were free from all exposure, and toward a restrictive theory, by which some but not all foreign state activities would be immunized. Congress adopted the latter theory in the Foreign Sovereign Immunities Act of 1976. IntLawGrrl Jennifer Kreder has posted on the significance of this letter in litigation over by Nazi Germany.