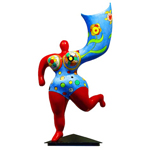 By age 7 she was living in the United States; by age 18 she'd already displayed artistic inclinations and was modeling for Vogue. At her death The New York Times described her as "a Franco-American artist internationally known for her colorful, monumental, cartoonlike sculptures and environments," and a "heroine to feminism before the modern movement even emerged."  Among her iconic creations were nanas, balloonish sculptures of voluptuous women. (photo credit) Some may be found in her Tarot Garden in Tuscany.

And her relative, Therese de Saint Phalle, is now Deputy-Registrar at the ICJ!