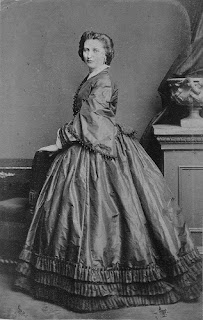 On this day in ...
... 1846, a daughter, Belle Aurelia Babb, was born into a farming family in Burlington, Iowa. Having grown up largely without her father present (the California Gold Rush lured him from home) she was graduated from Iowa Wesleyan College in 1865, the Civil War having opened seats for women students. She and her brother placed 1st and 2d, respectively, in that graduating class. Subsequently married to one of her college professors, Arabella Mansfield (right), as she became known, studied for the bar in her brother's law office, took the bar exam notwithstanding a state law barring anyone but white men over 21, and, in 1869, became the 1st woman admitted to the Iowa bar. (photo credit) Though she never practiced law -- becoming a university dean instead -- she belonged to the National League of Women Lawyers. Mansfield also led her state's campaign for women's suffrage. Nearly 70 years after her 1911, she was inducted into the Iowa Women's Hall of Fame; 2 decades after that, an award was established in her name to honor "outstanding women lawyers in Iowa who have promoted and nurtured women in the legal profession."