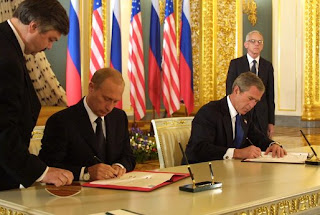 On this day in ...
... 2002 (10 years ago today), at Moscow, in a ceremony featuring Presidents Vladimir Putin, at far left, and George W. Bush, Russia and the United States signed the Strategic Offensive Reductions Treaty. (photo credit) Known as SORT, the weapons control treaty entered into force in 2003 and remained so until 2011, when it was superseded by the New START treaty discussed in prior IntLawGrrls posts.