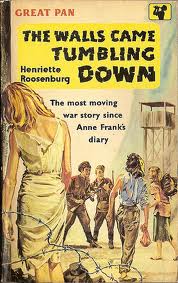 On this day in ...
... 1916, Henriette Roosenburg was born into an upper-class family in the Netherlands. When World War II started she was in graduate school at Leiden University. She joined the Dutch resistance, using the nom de guerre "Zip," and also wrote for a Dutch newspaper. Arrested in 1944 and given the death penalty, she was incarcerated at Waldheim prison in Germany. Released days before V-E Day, she and 4 other former prisoners embarked on a weeks-long journey back to the Netherlands. That sojourn among U.S., Soviet, and other encampments became the basis of Roosenburg's memoir, The Walls Came Tumbling Down (1957), at least one edition of which issued with the cover at left. (image credit) A Europe-based writer for Time magazine after the war, Roosenburg died in 1972.