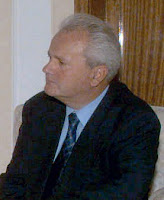 On this day in ...
... 1999, at The Hague, Netherlands, the International Criminal Tribunal for the former Yugoslavia indicted the sitting President of Serbia, Slobodan Milošević (right), and top aides on charges of having committed war crimes and crimes against humanity in Kosovo, a breakaway province. (Our colleague Michael P. Scharf analyzed the charges in this 1999 ASIL Insight.) The indictment came 2 months into the bombing campaign that NATO, acting without U.N. Security Council approval, launched against Serbia on account of its crackdown in Kosovo. That bombardment would end fewer than 2 weeks later. Milošević would remain in power for a time, but then would lose an election and be transferred to ICTY custody in 2001. (photo credit) His trial dragged on, and he died in his Dutch cell in 2006.