'We never wanted to participate in this nuclear race' 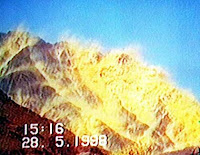 Prime Minister Nawaz Sharif announced in a televised statement that Pakistan had conducted 5 underground nuclear tests in Baluchistan, a region of Pakistan near its border with Afghanistan. (image credit) Sharif contended that the tests were "inevitable" following news 2 weeks earlier that India had conducted 5 similar nuclear tests. To this day, India and Pakistan remain  nuclear states outside the regulation of the Nuclear Non-Proliferation Treaty, and, also, tense neighbors.