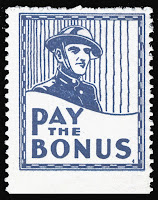 On this day in ...
... 1932 (80 years ago today), in the throes of the Great Depression, a "Bonus Army" of military veterans converged on Washington, D.C. They had begun assembling a few days earlier; on this day, a contingent of a few hundred arrived from Oregon, having hopped freight trains to make the cross-country journey. "[S]oon tens of thousands were encamped in Anacostia Flats and other areas in the northeast quadrant of the Capitol." The efforts of these vets, to secure in advance payments, or "bonuses," promised on account of their World War I service (image credit), were in vain. Many left of their own accord. In late July the rest were forced out by troops acting on orders of the President, Herbert Hoover. A bonus bill finally would pass in the Roosevelt Administration; it since has been supplanted by the GI Bill.