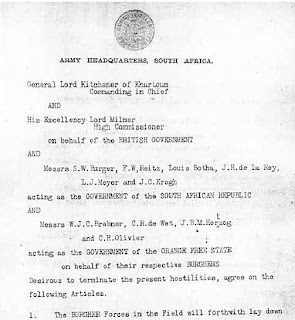 On this day in ...
... 1902 (110 years ago today), at Melrose House in Pretoria, representatives of Britain and of the Boers, or Afrikaner nationalists, with whom they'd been fighting for decades, signed the Treaty of Vereeniging (left). (image credit) The Boers ceded the independence, which they had maintained in South African Republic (Transvaal) and the Orange Free State, and submitted to the British Crown in exchange for amnesty and repatriation, some language and property rights rights, and, in a clause that augured the difficult years yet ahead in South Africa, a


'[p]romise of eventual self-government and an agreement that no decision would be taken regarding the franchise of black people until after the introduction of responsible government.'